Plague Doctor with Drawing, one of the most famous and recognized Venetian masks in this version with handmade illustration. Original wearable mask handmade in papier-mache and decorated entirely by hand. 100% Made in Italy certificate. 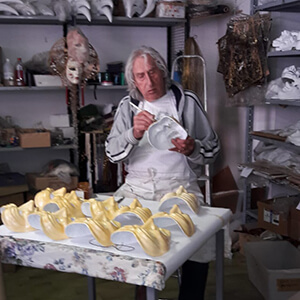 This mask is created by Gianni

Creative mind and unstoppable forge of ideas, he founded the laboratory in 1970. Even today the "Master mask maker" creates "his" masks with the same passion and intensity

In the fifteenth century the miasmic humoral doctrine came to believe that infectious diseases such as the plague, one of the most feared, were transmitted through fetid air and that poisonous particles were present that would infect people who came into contact with it. A garment is then created that allows the doctor to isolate himself as much as possible from infected individuals, thanks to gloves, tunic, shoes, hat and most important: a mask.

The mask was designed to isolate the face allowing breathing. In fact, the beak served as an air filter, in which perfumed essences such as mint or lavender, usually soaked in vinegar, were inserted. Given the relevance in the collective imagination and for what it represented, this mask certainly could not be missed among the masks of the Venice carnival.

Decorated entirely by hand by expert decorators according to the most traditional and ancient technique of Venetian masks “100% Made in Italy certificate”.

Why is the plague doctor’s mask very relevant in Venice even compared to other Venetian masks?

Venice being a city with a large commercial flow has suffered many times due to epidemics, particularly the plague. In 1575, for example, he killed nearly 50,000 people and just as many in 1630.

What is the black plague?

The Black Plague, Great Plague also known as Black Death was one of the most devastating pandemics in human history. Historians have estimated about 75-200 million deaths. The geographical areas involved were Europe and Asia.

What role does the plague doctor’s mask play in the art comedy?

It had no role, unlike Venetian masks like the Colombina mask, its origin is not related to the comedy of art

Who invented the plague doctor’s dress?

What material are the Venetian masks of the plague doctor on sale in our shop made of?

The masks are handcrafted in papier-mâché by expert mask maker

Our products are unique handmade pieces therefore all the images are indicative, as well as the measurements and colors that may be subject to variations.

No product in the cart
Continue Shopping